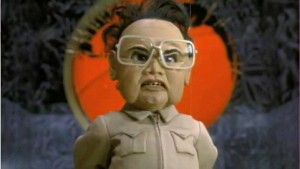 Those of you who have followed my blog know that I have a very special relationship with the late Dear Leader, Kim Jong Il. After visiting the DMZ last year, I referred to the North Korean regime as part Dr. Evil, part Wile E. Coyote. Then, in a direct response to me calling him “that crazy little bastard of a neighbor up north, who, at any given moment could decide to provoke a war,” he bombed an island in South Korea.  I guess one would call it a sorted history.

Well, that special relationship has come to an end, with the Dear Leader passing away at 69 (ish) years old. Now, it’s time to dust off my old Political Scientist Hat and give my two cents about my next-door neighbor. Before I begin, I would like to state a disclaimer: I’m not an expert on North Korea, and even experts on North Korea haven’t a clue to what a post-Kim Jong Il world will look like.

So, the going bet is that he will be succeeded by his son, Kim Jong Un. It seems many Koreans and political scientists alike are unsure what to make of this transition. On one hand, the relationship between the Koreas couldn’t get much worse, short of reigniting the Korean War.  On the other, Kim Jong Un might feel it is necessary to provoke South Korea in order to curry a favor with the old guard within the regime.

In some ways, the son is between a rock and a hard place. The current regime rules over a mere shell of a country. The economy is practically non-existent, North Korea lacks any real allies, and the threat of widespread famine is real and constant. It is quite remarkable that the regime has managed to rule over this country for as long as it has, but without substantial changes, the regime cannot last. However, even if Kim Jong Un wanted to enact sweeping changes, he faces very real threats from both the old guard party members, and the citizens.

The change in leadership could either lead to liberalization and eventual reunification, or to no changes at all, with a steadfast dedication to the status quo. Let’s look at these options one at a time.

A significant part of me wants to believe that this change in leadership will create positive long-term changes to both North and South Korea, but I realize there are huge barriers on both sides of the border standing in the way of such reforms. There are some facts that do support my inclination that Kim Jong Un will help to change the status quo in North Korea. He is relatively young (younger than me, in fact), and far removed from the generation of “revolutionaries” that first stormed into power (i.e. “being propped up by the Soviet Union”). He was also educated in Switzerland, and for the life of me, I can’t believe that he would see that beautiful country and all of the rights they have, and not be deeply affected.

This all sounds well and good on paper, but even if he wanted to change the country, he faces some severe internal threats. When dealing with a closed country that has been brainwashed by propaganda for generations, any change would be difficult. In the fantastic book  Nothing to Envy: Ordinary Lives in North Korea, the North Korean refugees who escaped the regime all felt a deep sense of guilt for defecting, despite their malnourished bodies and constant fear. And those were the people who escaped; I imagine those who are left behind are some of the most steadfast supporters. Also, a little bit of freedom can go a long way toward the eventual demise of a regime, just ask the Soviet Union or many of the recently fallen Middle Eastern regimes (or rather, you could ask, were they still around).

As if the internal threat of a citizens’ revolt were not enough, what about a coup from within the party? I’m sure many of the old guard generals are not thrilled to see a young buck take the reins of power. Were he to change things too quickly, especially by conspiring with “The Puppet Regime” (i.e. South Korea), he could just as quickly lose his support. It has been speculated that North Korea spends approximately 25% of its annual budget on the military, so military support is vital to any leader of the country.

Furthermore, let us not forget the external barriers to any possible reunification efforts. The wealth disparity between the Koreas is four times greater than the gap between East and West Germany when the Berlin Wall came down. Currently, there are approximately 49 million South Koreans, and they would be expected to support an additional 25 million. Needless to say, many South Koreans are not welcoming the idea of reunification with open arms. The financial burden alone would be extreme, and when you include social factors such as educational, cultural, and linguistic differences, the mere thought seems overwhelming.

Given all of the reasons listed above, why would the regime want to change? When studying any regimes, we must consider one over-arching fact that all regimes have in common: they want to maintain power at all cost. This means that  regimes only change when they feel it is in their best interest to do so, i.e.: when they must change to maintain power.

One of the many reasons I found studying Chinese politics so interesting in college, was the fact that this supposedly communist regime was able to make the transition to capitalism while maintaining its authoritarianism in human rights. Starting in the late 1970s under the leadership of Deng Xiaoping, the Chinese Communist Party realized that the only way to keep their jobs (and their necks) was to pull the country out of poverty by any means necessary. This should be a blueprint on how to make  a slow transition while maintaining power, but they have been very lonely in this regard.

It would be great to see North Korea make a similar long and slow transition toward capitalism the way China did, but this is clearly wishful thinking. It is also wishful thinking that a change in power will lead to any meaningful changes in either the standing of North Korea within the international community or within the country itself. But sometimes positive steps do occur, and it is far more likely to happen now than before. Were I to make any predictions, it would be that we will see the status quo with the new Dear Leader for at least several years to come. In the meantime, we wait.

2 comments for “On Kim Jong Il”