In less than two weeks, I will be moving and starting a new job. I decided to take a few precious hours out of my weekend to make the two-hour journey up to the “small” city of Paju (population 250,000) to check out my new home. Paju is to the northwest of Seoul, and my current home is in the southeast corner of this enormous city.

I started out my journey, as I must with all of them, by jumping on the #5 subway line. After nearly 10 months, I know it by heart. I transferred to the #2 line at Wangsimni Station, and rode it to the western edge of Seoul, at Hapjeong Station. This leg took a solid hour on its own. I followed the directions to the bus stop: exit #2, near a Family Mart (chain convenience store). Sure enough, there was the bus stop for the 200 and 2200 buses, including a rather sizable queue of Koreans waiting for the next one to come around.

I had hoped I was going have a few minutes to run inside the Family Mart for a little snack, as I had not eaten breakfast. Of course, the bus came right as I had taken half-a-step toward the convenience store. My stomach would have to wait, as I eagerly joined the end of the line.

The ride to Paju followed the Han River, and took about 45 minutes. Not far outside of Seoul–as we inevitably got closer to North Korea–the main road becomes heavily fortified with razor wire and guard stations. Indeed, my school is just under two miles from the NLL (Northern Limit Line), the maritime equivalent of the MDL (Military Demarcation Line), the effective border between the two Koreas.

All of this quickly faded from my mind as I approached the campus. 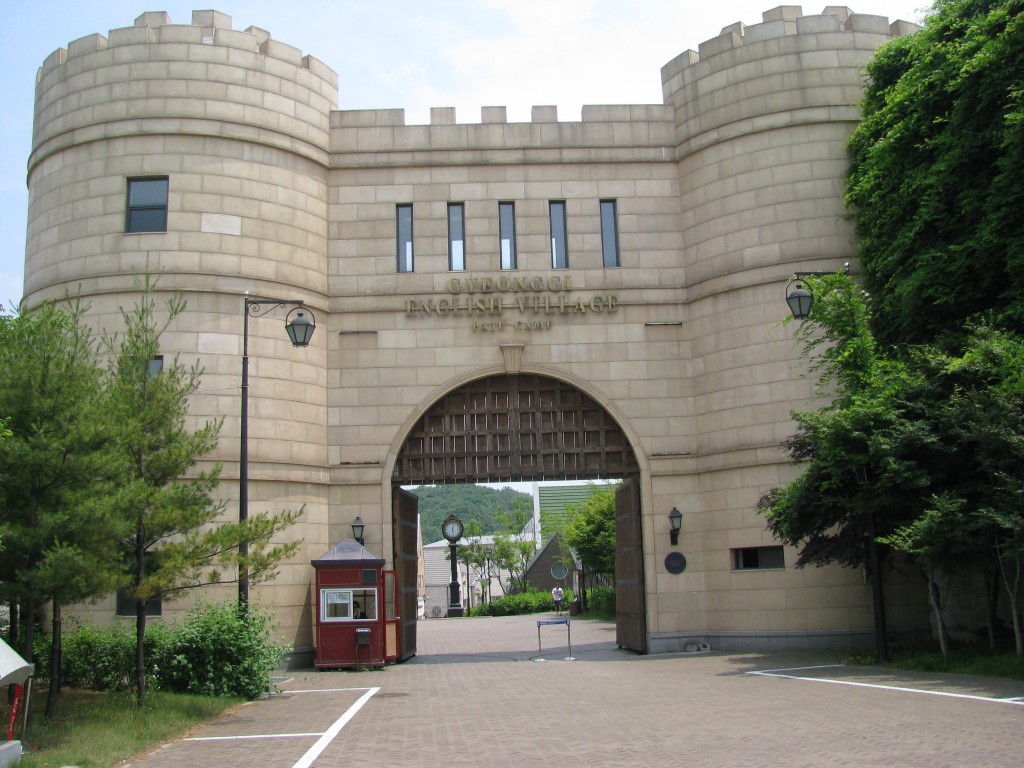 The only way I could have missed my stop is if I had been in a deep sleep, or possibly comatose. These imposing, nearly comical, structures came out of nowhere; clearly, I had arrived. I was met at the front gate by Mike, my H.R. contact for GEV. We walked quickly through campus, as he pointed out various buildings and gave little factoids here and there.

I had seen many of these same buildings on Google Earth, but nothing had quite prepared me for seeing everything in person. Everything was beautiful, and manicured, and over-the-top. I had joked previously that I would be working in a Korean version of Disney World, and in seeing the campus for the first time, I can say it was really no joke. 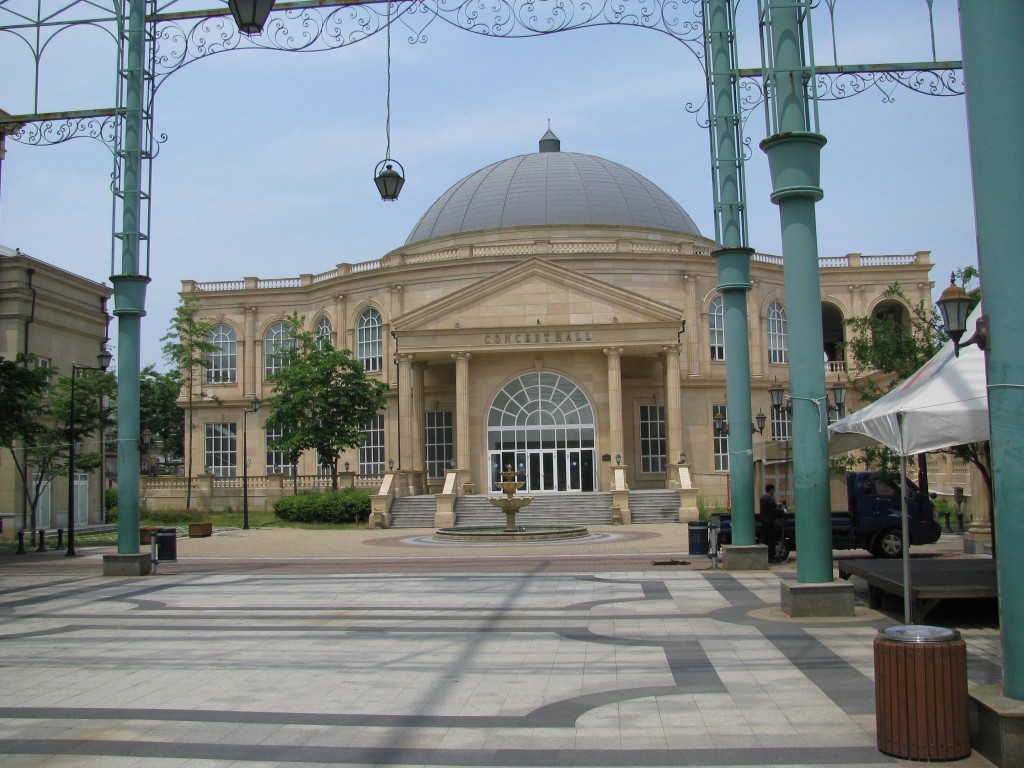 Beautiful, right? It holds legitimate concerts for the community and has a capacity of over 500 people. And yet, it feels fake. Obviously, the fake castle walls and the fake stonehenge did not help the Concert Hall’s credibility, but my point remains. I’ll be teaching real students, in real classrooms, and I’d like to think of myself as a real teacher. I hope I won’t be the only one who sees my work in the same light. 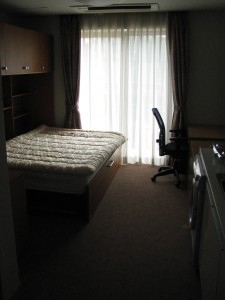 Our first stop was the apartment building. Each apartment building is named after a planet, or a former planet in the case of Pluto. We stopped in Jupiter, and I’m ashamed that I didn’t think to ask if it was the biggest. The apartment appeared to be slightly smaller than my current one, but it also had many more amenities. It has a built-in bookshelf above the bed, a desk, TV and DVD player, carpet, a small balcony, and a full-sized bed.

So if nothing else, the bedroom is at least a full shoebox, and not one of the many half-shoebox varieties that exist in Korea. (Some of my friends have to cook from their beds). And I would like to think that I will be spending less time in my apartment anyway. There’s a field to let Sydney run around in, an on-site pub, work out facilities, and pick-up games of soccer, basketball, and softball many nights of the week.

After departing Jupiter, we walked to City Hall and into the main offices of GEV. I needed to turn in my contract, a hefty, bilingual, 27-page affair, as well as my passport, alien registration card, and my signed letter of release. With those finishing touches and a sign off on my visa transfer from the government, I would be an employee of Gyeonggi English Village. 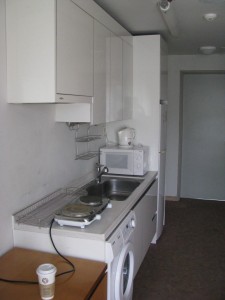 I chatted with Mike for perhaps the next quarter of an hour, although almost none of the conversation centered on the job. I was at peace with my decision, and excited for the opportunity. In the course of our chat, I found out that the next job openings at GEV would not be until October. There are nearly 100 staff, and not one of them would be leaving when my previous contract would have been up. With this knowledge, a slight grin appeared on my face, and I said to myself as much as to Mike, “I’m really glad I made the jump when I did.” Sometimes, we just have to know when to make a change in our lives, even if the timing is seemingly imperfect.

We slowly strolled out of City Hall, and stopped on the steps to continue talking for another couple of minutes. I looked out at the peaceful, well-manicured campus. A young, attractive Korean couple held hands as they walked up to a fountain in front of the Hall as a cool breeze lazily swept through the buildings. Above, I noticed vibrant blue skies that were punctuated by soft cumulus clouds. I remarked on the extraordinary day.

“Yeah, you don’t get skies like that in Seoul, and do you feel that nice breeze?” Mike said, in agreement. 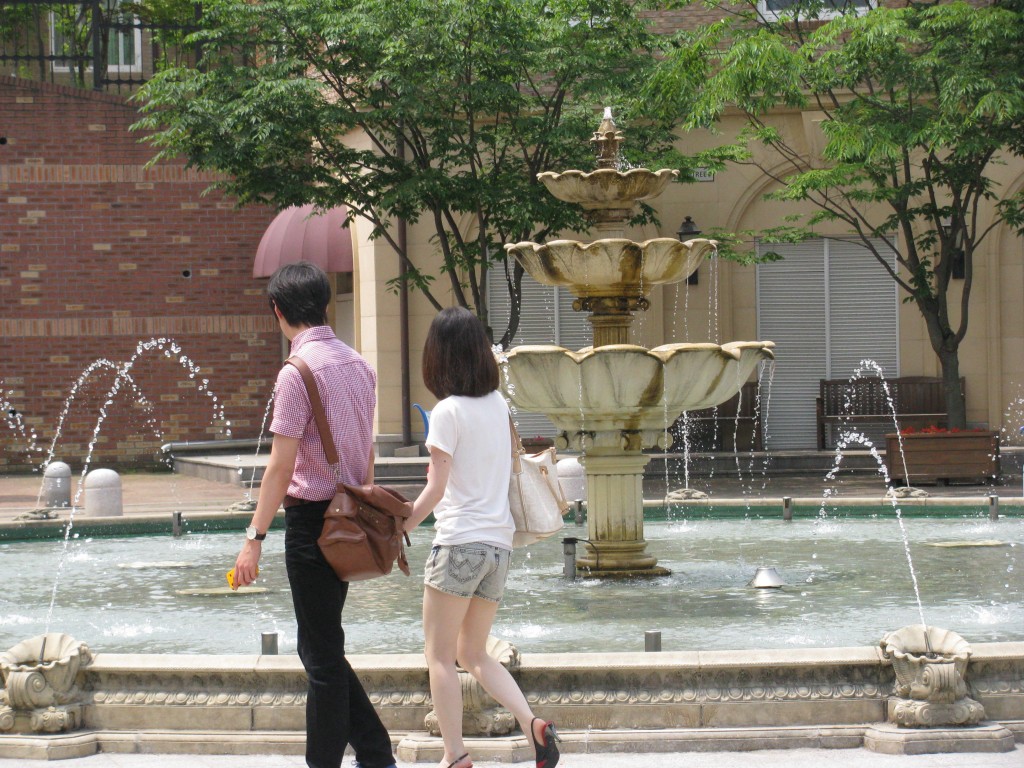 It was amazing, we were just a stone’s throw away from one of the largest cities in the world, and yet the weather had improved, even if only by the slightest of margins. The day was slightly cooler, but noticeable, and the sky had taken on a clearer, bluer tone. He then promised something that wasn’t in any of the promotional materials, “Also, at night, we have these little dots of light in the sky–thousands of them.” The light pollution and smog in Seoul drowns out all but the brightest handful of stars and the moon, nearly to the same extent as the people on the planet Krikkit must have experienced in Douglas Adams’s Hitchhiker’s series. I guess living on North Korea’s doorstep has its advantages.

I finally left Mike and wandered around campus. I had a proper English-style ale and what passes for fish ‘n’ chips at the Double Decker pub. I lifted my beer to my lips, and it tasted like home; I had arrived. 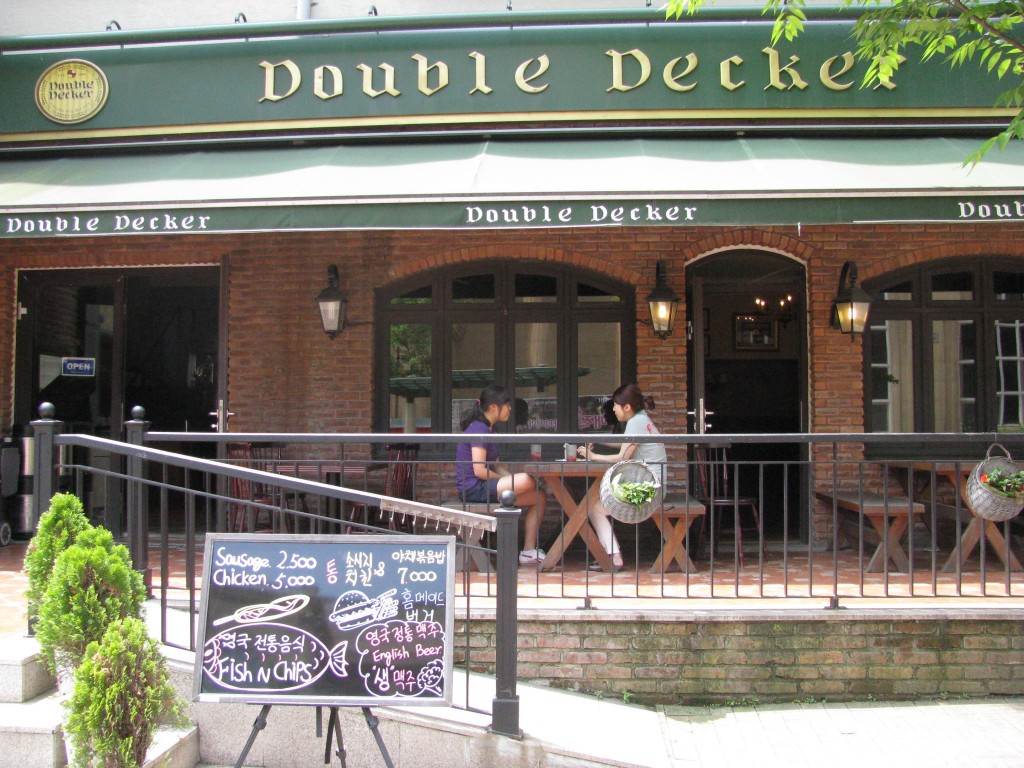 ← The Date is Set
I Love this Country →