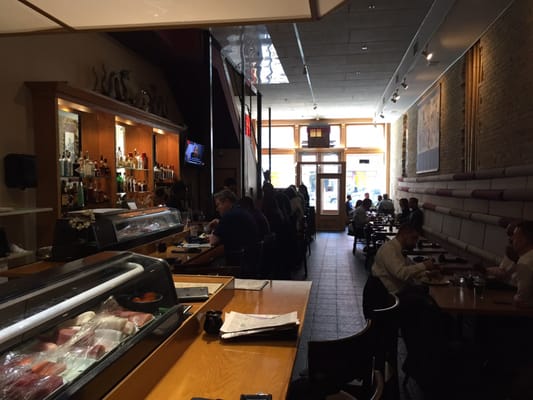 As I sit here, as safe as I can be in isolation while the coronavirus pandemic rages on, it’s easy to think about parallels to the economic crisis of 2008.

So far, The Great Recession has been the defining moment of my adult life. It happened just after I graduated from the University of Tennessee, just when I was trying to start a career. I was forced to temporarily give up on my dreams of starting a career and getting a master’s degree; instead, the crisis forced me to take several dead-end, part-time, and temporary jobs to survive. It got so bad that I eventually left the US in the summer of 2010.

One week–five days, actually–marked the nadir of the recession for me.

In early November 2009, my car broke down on a Friday. The starter had gone. The $300 or so I needed to fix it was well beyond my tip-reliant job as a waiter at Saki Tumi Restaurant in downtown Milwaukee. Thankfully, I could bike to work. Or rather I could for a weekend.

On Monday, someone relieved me of my bike.

On Wednesday, I borrowed my roommate’s bike to go work. I took two steps inside the door, when the manager stopped me to fire me on the spot.

Why was I fired? Apparently I had inadvertently offended his friends. Unbeknownst to me, his friends sat at one of my tables the night before. I remembered them clearly. They sat down and demanded food that wasn’t on the menu. I checked with the kitchen staff, and they agreed that they could make it. Great! I reported back to the customers, and instead of being happy about it, the man instead demanded that they only pay the lunch price, despite it being well into evening hours. I told him I couldn’t do that, and the couple left in a huff.

I chalked it off to unreasonable customer expectations. It happens. I never expected that it would cost me my job. How could I?

In five days I had gone from barely surviving to desperate.

And then it got worse.

I couldn’t move my car, so it accumulated tickets before getting towed to a lot well out of town. I needed money I didn’t have to pay the tickets and fix my car, so I could then go about the business of finding a job.

I filed for unemployment benefits–which I had earned and was entitled to. The manager of Saki Tumi, Jerry Cruz, contested my claim. He claimed that I was “justly fired,” and therefore not entitled to benefits.

He was wrong, of course. I had worked there for 14 months without any verbal or written disciplinary warnings. The state required three such warnings (one verbal and two written) in order to deny claims. No matter, he held up my benefits–at a time when I needed them the most–for three long months while I waited for the government to finally get around to my case.

He didn’t even show up for the hearing.

He knew he didn’t have a case. He knew he fired me without warning, and that it was unjustifiable. And he did so at a time when everyone was struggling in the worst economy in a lifetime.

I’ve never been able to wrap my brain around how needlessly cruel that was. At a time when compassion and understanding was needed the most, someone in a position of power (and not even that much power in the grand scheme of things) did something so hurtful and potentially dangerous.

I’m worried about how all the Jerrys of the world will respond to this crisis, especially in the US where the social safety net is already lacking and geared toward siding with the rich and powerful. In the above example, there is no reason for the state to trust business owners over workers. The regulation could be easily rewritten, getting money into the hands of the unemployed first, and then revoking those privileges if an employer contests and backs up their claims.

Now we’re entering a situation that is even worse, and with even more dire consequences for those who are already struggling the most. I’m worried about healthcare insurance that is directly linked to employment, and employers laying off workers during a health crisis. I’m worried that concern over the short term bottom line is going to cause a lot more long term damage.

It’s easy to see the stories of people coming together and being hopeful in this mess. But equally, there are a lot of self-interested parties out there.

I don’t want the point of this post to be me complaining about something in the distant past. Rather, I want you to read it and think once, twice, three times about your actions in the midst of this crisis. We’ve all suffered, and we will all have to continue sacrificing for the foreseeable future. We have the power to be compassionate in a crisis individually, and many of us will be absolutely reliant on the kindness of others to survive.

This crisis is likely to cost all of us something. For those of us lucky to survive the illness, many of us will lose loved ones. Many more will lose jobs. Or opportunities. Or once-in-a-lifetime events such as graduations, weddings, or being there for the birth of a child or grandchild.

We will face a long road to recovery. The last thing we need is to make that road bumpier for those around us. Don’t be like Jerry.

← Essentially Non-Essential: Maintaining Humanity In A Crisis
Sliding Doors: When a Missed Opportunity Has Big Consequences →