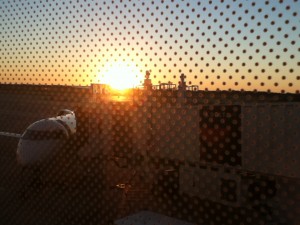 I was a bit taken aback by the recent New York Times article on the world’s best airports. I had long known that Seoul’s Incheon International Airport ranked among the best, but I was not prepared for Munich’s entry in the Top 5.

Sure, it’s all subjective anyway, and I’m sure someone responsible for making improvements to the airport feels very proud of this accomplishment. Perhaps he or she even got a raise, a pat on the back, and a congratulatory “Atta boy!” or “Atta girl!” (in German, of course).

It’s a shock because while Munich is a nice airport, I wouldn’t consider it one of the best in the world, but that’s the point of this article. In other words, an airport doesn’t need to be brand new, with flashy renovations to be a great airport. And at the end of the day, an airport is just an airport. A point at the beginning, end, or middle of a journey, and not the destination in and of itself. Leave it to the Germans to emphasize functionality over form.

Although it has become commonplace that the U.S. no longer tops the world in various “Best of” categories, it was refreshing to see us not make this list, for reasons I’ll elaborate on below.

I’ve been known on occasion to go on about the greatness that is Incheon International Airport. If I’m going to get stuck in any airport in the world, it’s certainly my top choice. But I wonder how necessary it is to have a beautiful, gleaming airport, trendy shops and restaurants, water fountains, hotel rooms, and even a freakin’ golf driving range?

City planners might feel that having a fantastic, futuristic airport in its city limits (or more often than not, just outside) will create a wonderful first impression for travelers, and hopefully drive future tourism and business. I’m not so sure. And as far as America goes, we don’t have to look far to find needed improvements to other areas of infrastructure which should far outstrip our need for fancier airports. Of course, this doesn’t stop airports from releasing an eye-watering $75 billion wish list for the next 5 years.

I’ve discussed at great length about my love of flying and how I’ve felt at home in the airport. However, I still feel that the airport doesn’t have to be a luxury experience. Indeed, by making the would-be traveler feel so at home within the spacious confines of an airport, cities may actually be doing themselves a disservice.

For a moment, imagine yourself as a traveler who has been stranded in a random airport due to a long layover or a canceled flight. Your next flight is in 6 (or more) hours, and you’re in a new city. Do you leave the airport and explore, or do you stay in the airport and hit a bucket of balls? Of course, there’s a matter of preference here, but if the weather is nice and it’s an easy trip into town, the former option becomes much more appealing, especially if it’s an easy trip. And if the city has enough to offer in a few hours, who’s to say that you won’t be interested in making it your destination at a later date?

Some airlines (like Korean Air in the aforementioned Incheon Airport, which seems to do just about everything right) even offer free transportation into the city for longer layovers. Icelandair goes one step further and offers a free stay in Iceland, up to 7 days, during transatlantic flights. Such services can be provided for little-to-no-cost from the airlines (or airports), but can create a very positive reflection and increase future tourism to the area.

To me, it’s more important that airports provide flexibility for travelers, not just fancy amenities. Today’s travelers are more varied than ever before. Some want shops. Some want luxury. Some want to experience the local flavor. It may be difficult to cater to such a diverse crowd, but small improvements can go a long way.

As stated above, easy and affordable (if not free) transportation to the adjacent city is a great way to promote local culture and tourism. For municipalities, this seems like a much better investment to get travelers to view your city as more than just another layover. 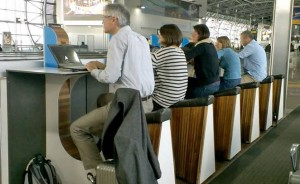 Plus you can get a bit of exercise between flights! Source: Treehugger.com

For the travelers who are not interested in leaving the friendly confines of the airport, free wi-fi and charging stations is a “must” for today’s crowd, from the cheapest travelers to the high-class businessmen, everyone wants to plug-in these days. The best example I’ve seen of charging stations so far is in Amsterdam’s airport, which requires users to create their own energy using (what else?) stationary bikes.

Another small but significant improvement is the availability of sleeping cubes/pods/etc. When you travel enough, you will eventually find yourself stranded for long periods of time at an airport. Personally, I’ve found myself sleeping in a quiet corner in Chicago O’Hare after an all-niter. I’ve also had the much more pleasant experience of sleeping in Sam’s Snooze at My Space in New Delhi, India. Having a quiet, comfortable place to sleep is a win-win for the airport and traveler. The traveler can catch a few winks without worry of waking up minus carry-on luggage, fancy watch, iPhone, and most of their clothes. And the airport can make a few bucks, either directly or by leasing the space to a local business.

There are some fantastic new airports around the world, and I’ve had the pleasure to visit a great number of them. However, airports shouldn’t be the destination, and cities would do well to remember that.

← In Between Days
A World Without Borders: The Trifecta (plus one) of Peace →