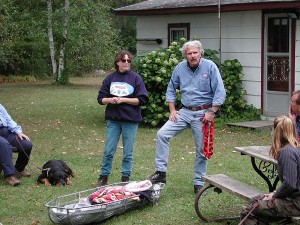 Photo stolen ruthlessly and without permission from http://www159.pair.com/

I always bring a deck of cards with me when I travel. This was my uncle’s suggestion. He told me on more than one occasion, “The most important thing to bring is a deck of cards, because if you get lost, you can play solitaire, and someone will walk up behind you and say, ‘The jack goes on the queen.'” This was long before smart phones.

I wonder how Larry would have adapted to life in the 21st Century. He barely got a whiff of it before checking out. Sometimes I think it’s for the best. He was a rugged outdoorsman. He dreamed of living in a log cabin in Northern Wisconsin, which it must be said takes a great deal of commitment. Nope, I can’t imagine ol’ Larry getting into a political debate on Facebook. I rather not try.

He loved a great many things. His family. Antiques. Talking about everything. Hats. Clear summer days, and crisp winter nights. He loved cigarettes. He loved them so much he never even pretended to want to quit. He would take each and every unfiltered Camel cigarette out of the packet, smoke it down, put it out, then carefully and ceremoniously unwrap the remaining butt, release the precious tobacco shreds onto the ground. When he died of lung cancer, no one was shocked, himself least of all.

My mom, an avid cigarette quitter, vowed that this would be the last warning she would ever need. I’ve since heard the same speech after her mother in-law died of emphysema, her ex-husband died of lung cancer, and after her mother passed from the same.

Larry died 12 years ago today, not so far away from the wilderness of The North, but practically a world away. Instead of being outdoors and working with his hands, he was bedridden and unable to do the simplest of tasks. Instead of being surrounded by impossibly large trees, crisp snow, and a frozen lake, he was surrounded by sterile plastic and metal. Instead of being tuned into nature, he was hooked up to all sorts of machines, with pipes coming in and out of him every which way.

All of that 21st Century technology did little to extend his life, and the little comfort it did provide only worked to kill what little humanity he had left. What we saw those last few weeks of life wasn’t Larry, but Cancer with a side of Morphine Addiction. I’m certain Larry, indeed the rest of us, would have preferred the relatively swift and painless death by bear mauling.

He didn’t bring a deck of cards that day. I guess he knew where he was going. The rest of us were left to ponder and speculate about Larry’s Next Big Adventure, each of us chiming in with our own pet theories. “He’s in a better place.” “His soul is free.” “He’s in the crematorium.”

I guess none of these guesses are mutually exclusive. “A better place” than screaming in agony whilst dying from stage 4 lung cancer isn’t hard to imagine, up to and including the crematorium.

When I packed my overnight bag this morning for our impromptu trip to Copenhagen, I hesitated when I grabbed my deck of cards. The deck, roughly the same size as a packet of cigarettes, weighed heavy in my hands, and heavy on my heart. I thought of Larry and dropped it in the pack.

← “The Interview”: How to Lose at Poker to Terrorists
In Support of Religious Moderates →