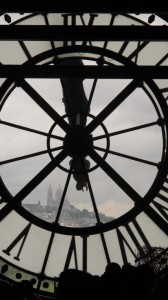 Note: So, this post is only about 5 months late. And I believe apologies are in order to my good friend Dr. Lt. Rhett, for sharing his tales of travel woes, but I promise it has a happy ending.

The last time I traveled abroad with my good college friend Rhett, he had fallen deathly ill and had to be abandoned in a Moscow hospital, with only large, Russian orderlies pumping clear vials of mystery fluid into his veins. So when Rhett had to make an unscheduled exit somewhere in the Parisian suburbs and proceed to vomit violently all over the platform, I shouldn’t have been surprised. Clearly, the travel gods find it necessary to punish Rhett when we travel together, probably because we’re unapologetic atheists, especially to those snooty travel gods who think that we’ll change our minds just from some ill-timed acute illness, bus strikes, stolen passports, and the like.

The idea of meeting up in Paris came about somewhat impulsively, albeit in a modern, social media-driven way. He posted his plans for a European vacation with his girlfriend Julie on Facebook; I saw the post, sent him a message along the lines of, “Hey! You should come to Munich (or barring that, we should meet up somewhere)!” And because this was sent through Facebook, I included several additional exclamation points and emoticons, as per Emily Post’s book, “Post’s Modern Social Media Etiquette.”

More smiley faces and exclamation points were exchanged, and we agreed on Paris as our rendezvous, or as the French say, “Rendezvous.”

Christine managed to get a few extra days off work, so we were able to take full advantage of a long weekend in the City of Light. Of the four of us, she was the only one who had previous experience in the city, but she was eager to return. While it is easy to forget about amazing destinations in your own backyard (as Paris would be to a girl growing up in Denmark), Paris has long held a special place in the hearts of would-be travelers from both near and far.

Despite my travels, especially those in Europe, I hadn’t had the inclination to go to Paris yet. This was not because of a lack of desire, it is PARIS after all, but instead a greater desire to see more out-of-the-way locales. So many Americans have traveled to Rome or Paris or London, only to return to the States and proudly proclaim, “Well, I’ve seen Europe!” This is like a traveler spending a week in New York and proclaiming they’ve been to the U.S. As a general rule, large, internationally renowned, cosmopolitan cities are very poor representatives of the country or continent that contains them. I imagine the average New Yorker has more in common with the average Parisian or Londoner, than he or she does with the average Tennessean (for instance).

Christine and I were lucky to find a couchsurfer willing to host us in Paris, and luckier still that his apartment was on about a ten minute walk away from the hotel where Rhett and Julie would be staying.

We arrived in the city a full day ahead of them, and set out early to explore the city, after an obligatory stop at the local bakery for coffee and breakfast. 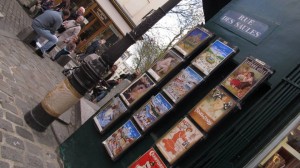 The overcast skies quickly turned into a light drizzle, and then a steady rain. When traveling, this can only mean one thing–it was a good museum day. Trip Advisor was surprising unequivocal about where we should head, with the art museum, Musee d’Orsay gaining top marks. The choice was an excellent one, indeed. The museum had been converted to its present state from a train station, giving it a unique and rather spacious, airy feel. The museum was home to many of Paris’s famous Impressionists from the late 19th and early 20th centuries, and despite its size, we could move about for hours without being completely overwhelmed.

I’m hardly qualified to comment on art. When looking at a painting, my reactions usually range from, “Oh, that’s nice,” to “Hey, I think I’ve seen this one before.” In this regard, Musee d’Orsay was a wonderful mixture of both reactions, leaving me with the sense, dare I say “impression,” that I’ve seen some worth-while artwork. Having been properly cultured in the morning, we felt free to just take in the Parisian atmosphere, mainly by enjoying a nice, long lunch, and walking through the streets and taking in the sights.

The following day, we arrived early at the labyrinth-esque Gare du Nord train station, and after some difficulty, and a great deal of vague and/or bad directions, we found our way to the proper platform to wait for Rhett and Julie to arrive from Amsterdam. As promised, Rhett showed up wearing a shade of orange that most would describe as “blinding,” but we would describe as “the most beautiful shade of any color, ever, ever” or simply, “Tennessee Orange.” Christine would describe my Tennessee shirt as, “The one you’re not allowed to wear in public.” This differs from my last one I wasn’t allowed to wear in public, which seems to have mysteriously disappeared.

I’m sure Rhett’s overtly American tee shirt was offensive to the local sensibilities as well, and deep down, this made me extremely happy.

Once we dropped off their luggage at the hotel, we were off to see the sights again.

In the years since the trip to Mother Russia, Rhett had not lost any of his signature exuberance for travel. Like a pensioner who had just left his small, rural home town for the first time, a new exclamation left his lips every three to four seconds, as he raised his camera to snap off half a dozen more photos.

Julie, on the other hand, despite being just a few days into her first trip abroad, seemed like an old hand at it. She was cool and collected, finding her way about the city with ease, and simply taking in the Parisian atmosphere.

We had the idea of having a picnic outside of Notre Dame cathedral. Christine and I have never really gotten over slumming it in various third world destinations, so our idea of a picnic included buying a cheap loaf of bread, some brie, and a few beers we brought with us from Munich. We were a bit disheartened to see Rhett and Julie grab pre-made sandwiches from the supermarket, but at least the beer was a hit with them. Julie even managed to surprise herself with a new-found admiration for dark beer. 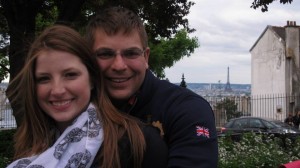 Our travel companions, Julie and Rhett.

The rest of the day was spent more or less wandering the streets, enjoying the bright blue sky and blazing sun which made the dazzling architecture pop in a way that most cities can only dream. After a few hours of this, it led Rhett and me to agree that Paris was like the icing on the cake, if the cake were all icing. It’s almost too much.

We retired after sharing a bottle of wine at a sidewalk cafe (because that just felt right), and met early the next day for a trip to the Palace of Versailles. Unfortunately, just about all the other tourists had the same idea, and we were greeted by a line, or perhaps a herd, that would have been a much better defense against the Germans than other previous efforts. We took one look at the line, and held a quick vote. “Fuck that” won in a landslide. However, a cursory glance around showed that the garden was free (both in the sense of not costing anything, and in the sense that we would not be impeded by ravenous tourists), so we decided to go for a stroll in the 3-plus square miles of lush trees, hedges, fountains, and lakes.

It was a great decision. By the time we had finished meandering through the vast garden, the line to get into the palace had diminished to something resembling a 40-minute wait (A.K.A. 1 standardized Disney line). 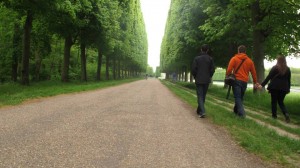 In the Gardens of Versailles.

If that initial decision represented the pinnacle of our travel prowess, the decision to grab a quick fast food burger between the garden and the palace was the low point. Observant readers might remember a certain member of our party falling ill on a Paris-bound train, and this was surely the inciting incident.

The palace was worth the wait, after all, and it was easy to see why the French royal family was such an easy target two hundred years ago. But soon after entering, Rhett began showing symptoms of the rapidly approaching food poisoning. By the end, we were rushing toward the sweet, fresh air outside (as much as was humanly possible, given the wall of slow-moving bodies in front of us).

The train ride back, even before the emergency exit, became a farce rarely seen outside of your favorite sitcom. First, we waited in line for the better part of an hour to buy a ticket. Then, suddenly out of nowhere, a man working for the train company just decided to let everyone on the train, tickets be damned. The gates were opened, and a packed station poured onto the platform like a dam bursting. Somehow we were lucky to find seats within the same general vicinity of each other. Christine and I had seats facing each other, Rhett was directly behind me, facing the other direction, and Julie was across from Rhett, and over one seat.

After a few minutes, Christine and I were deep in conversation about nothing in particular, when we noticed a commotion behind me. For some reason, Rhett was now sitting on the floor with his feet up in the lap of a kind, though not particularly helpful, Frenchman. The man was also yelling to other passengers to open the windows, as he suspected motion sickness for our stricken friend. Rhett was trying to explain that it wasn’t motion sickness (and on a personal note, I wondered why he didn’t pull the “I’m a doctor” card, but unlike me, he’s not a total asshole). Other passengers began chiming in with often contradictory advice, and well, perhaps it was better for everyone when he excused himself to politely return the burger, which I assume was found on that very platform before being cooked (?) and served to Rhett. 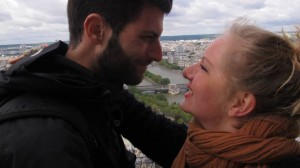 Christine and I, lots of love on the Eiffel Tower.

Julie wasn’t going to let a sick boyfriend get in her way of enjoying her first trip to Paris, so we met up the next morning for an obligatory ride up the Eiffel Tower. I’ve found that seeing world-famous monuments in person is often a highly disappointing experience. This is not the case with the Eiffel Tower. I kept looking up at it thinking, “That is impossibly big.” And sure, it’s a horribly touristy thing to do, but the view from the top was undoubtedly magnificent.

But before we made our way to the top, a man in sickening clichéd fashion, dropped to his knee to propose. I caught Christine’s eye, and we were both thinking about the burden of knowledge that Rhett would soon propose to Julie. A week later, French fast food all out of his system, Rhett would do just that on the Amalfi  Coast in Italy. Of course she said yes.