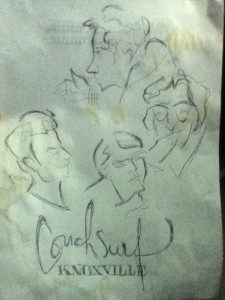 An excellent back-of-the-menu sketch by Carla.

I could rightfully consider Knoxville, Tennessee home as much as any other spot on Earth. I’ve lived there 12 years, far longer than any other place. I went to high school and college there. I have a more fond memories in East Tennessee than I should be entitled to, but after four and a half years away–two in Milwaukee, two in Korea, and a lengthy trek in South America–“home” felt anything but.

Many of my best friends had moved to far corners of the country (or globe). Others were married and/or had kids. And others still had gone their own way with their own life, and we were no longer in contact. None of these occurrences are at all unusual, but there was no denying the obvious: my hometown might look the same, but I had changed and so had the people in it.

In the past, I’ve met new friends by going to local meet-ups through couchsurfing, but I questioned the value this time. For one, I felt like I shouldn’t have to do this; Knoxville was my home, not some new city. I should know people. Also, it was a temporary problem. I would be moving out to be with my girlfriend, we just had to get the arrangements settled. Knoxville would be a blip on the radar, and in my estimation, it probably wasn’t worth the effort to go out and meet new people. In the meantime, I would just keep myself busy, enjoy the company of my dog, and try not to lose my mind by watching too many House reruns on mid-afternoon TV.

I kept myself busy the first few weeks. It helped that I was bouncing between South Florida and East Tennessee with various trips to see family. But soon that chaos subsided and I was stuck at Mom’s, and the need for some social contact with my peers consumed me. I checked couchsurfing for events periodically, but it didn’t seem as if much was going on. I had just about given up, when I received a message from a local couchsurfer, Carla, with an invitation to come to the monthly pot-luck dinner. And as luck would have it, I could borrow a car and make it out that night.

To non-couchsurfers, this situation might seem a bit bizarre, and perhaps borderline dangerous. Certainly, there are a few tense moments at the beginning. Is this the right place? Do I recognize any of these people from their profiles? If I ask if this is the couchsurfing pot-luck, will these people look at me like I’m insane? My friend Mark had an easy fix for this first-time meet-up conundrum: wearing a shirt that reads, “Got Couch?” I own no such apparel.

The meet-up spot was a small neighborhood community center near downtown. I carried a  six-pack of beer, steadied myself, and knocked on the door. I was greeted by Carla, the same surfer who had sent me the invitation. She quickly introduced me to the half-a-dozen or so surfers around the table, whose names I promptly jumbled and then forgot entirely. Aside from the occasional request for repeating a name, all awkwardness was in the review mirror, and robust conversation flowed as easily as the beer and other libations. After disappointing attempts to meet couchsurfers in Korea, this was a pleasant surprise, although it shouldn’t have been. Couchsurfers, in general, thrive on meeting new, adventurous people. We have a lot in common, a shared point of reference, and some pretty interesting stories to tell.

I spoke at great length with Alan, a couchsurfer with a love of scuba diving and hard cider (though, presumably not at the same time), about our experiences in South America, particularly Peru and Bolivia. In most places, particularly in East Tennessee, such conversations would be seen at best as annoying, and at worst bragging or borderline rude, but not here. We were free to discuss the minutiae of traveling, and tell our best stories from the road.

After a couple of hours, we made our way to Barley’s in the Old City for a few more brews and some of the worst matches of pool ever attempted by man. I made an early-ish exit, despite wanting to stay out longer. I was borrowing my mother’s car and had no cell-phone, so I was certain that she would freak out if I went through with a late night.

Over the next month, I met up with these couchsurfers a few more times. Twice more at Barley’s and then once more for my second and final pot-luck. This time, we were not huddled inside the frigid community center, but out on the front porch, enjoying the early spring warmth and extra hour of sunlight courtesy of daylight savings. We were joined by a few new faces, including Melissa, the couchsurfer who agreed to watch my dog, Sydney, for a month while I traveled. Our second stop was not Barley’s, but instead Cairo Cafe, a nearby hookah bar.

Several couchsurfers stated how it didn’t seem like we had only known each other a month. The connections we made seemed much deeper than that brief amount of time would normally allow. I agreed, it didn’t seem possible. I felt foolish for once thinking that meeting new Knoxvillians wouldn’t be worth the effort. No, even if I had only met these people once, my life would have been richer because of it. And it doesn’t take long to make a positive impact in someone else’s life. Hell, I think back to the three nights I hosted Christine, never knowing that those three nights, like the fabled flapping of a butterfly’s wings, would have wonderful and long-lasting influence over the course of my life. This is the power of couchsurfing; it can make you feel at home when you’re away from home, and at home even when you no longer recognize home.

← The Big Blog Exchange
Dog is My Co-Pilot →