Anyone who spends more than, say, 30 seconds around me will hear more than they ever cared to know about my best friend and traveling companion, Sydney, a 4-year-old Australian Shepherd pup. The person in question will then be subjected to a series of poor-quality photos on my iPod, along with a series of ready-to-tell stories that I have saved for just such an occasion. Becoming a dog owner has turned me into that annoying parent who feels compelled to share every aspect of his relationship to his child, whether the listener cares to hear about it or not (usually the latter). 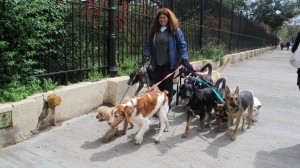 This was actually a small number of dogs, compared to most of the dog walkers we witnessed.

My love of dogs extends far past my own furry pal, so I was pleasantly surprised to find South America overflowing with our canine friends. From the first stop in Buenos Aires, Christine and I were amazed by the dog culture in Latin America. The Lonely Planet hints at this by warning us travelers to watch the sidewalks for possible doggy bombs that would necessitate awkwardly trying to remove the mess, usually by dragging one’s foot along the sidewalk. The guide also advised us to be on the lookout for dog walkers, often holding the leads of a dozen dogs or more.

On our very first walk around the city, we found one of these fabled dog walkers. The sight was something else. As a dog owner, I think about how my own pup can sometimes be difficult to manage on a walk. And I think about past attempts to walk my dog and my mom’s dog at the same time, and how those walks ended quickly after frustrating attempts to get them both headed in the same direction at the same time, and then trying in vain to prevent their leashes from getting tangled. Somehow, these professional dog walkers managed their pack with ease, and pushed their way along the crowded Argentinean streets with no problems at all. It was very impressive. 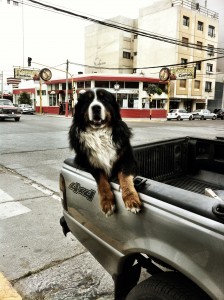 However, Buenos Aires proved to be unique in this regard. It was the one place we visited where the majority of dogs we came across were pure-bred and the only place where we saw these professional dog walkers. The further down the coast we went in Argentina, the greater the percentage of mutts and strays. Eventually, the mutts started to blend together into a generic, medium-to-large dog that became ubiquitous throughout most parts of South America.

Some of these mutts had homes, a great number of them did not, but these strays did not appear to be particularly unhappy or unhealthy. In fact, we found many to be extremely well-mannered and friendly, two qualities not readily associated with most strays. On more than a few occasions, a stray would just start following us around. There was one stray that we met at the bus station in El Calafate, Argentina. He followed us around town for about an hour, and even waited for us outside shops, all the while wagging his tail and looking at us as if to say, “Come on, I know you have food.” It was heartbreaking leaving such a friendly pup outside when we finally made it back to our hostel. He waited for us for a few minutes, and then finally went on his way. 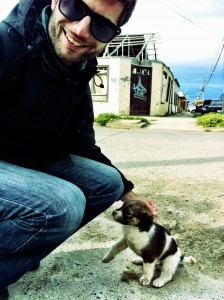 Puppies are cute in any country.

Not to be outdone by their Argentinean counterparts, two of the cutest puppies this side of the equator started following us in Punta Arenas, Chile. These pups could not have been more than six weeks old, and they latched themselves onto our back heels for several blocks, until we were once again saved by our hostel. The entire way I had to remind myself that I had a perfectly good dog back home, and there was no way I could justify taking either one of these puppies, especially not the adorable black one.

Dogs became a wonderful constant along the way. In each city the dogs would roam the streets, always with a friendly grin, always with wagging tails, and always with some purpose to their jog. These dogs were busy doing dog stuff, and they wanted the world to know it. Even if they lacked owners, none of them seemed malnourished, and we didn’t have a problem with one aggressive dog. It seemed, at least to me, like some sort of dog paradise.

Christine and I were not the only ones to notice this. At one point, we took a break for lunch during our three-day trek through Colca Canyon in Peru. Suddenly, a dog came bounding up over a hill, stopped to sniff us, and then returned the direction from which she came. She repeated this process a couple of times, until she was finally accompanied by two other hikers. The woman, a loquacious kiwi, explained that the dog was actually leading them, not the other way around. Apparently, they picked up this mutt early in the excursion, and the dog had been leading them safely along the ill-defined paths. After questioning each and every turn for the last two days, this strategy made perfect sense to us.

When listing reasons to travel, “seeing something new,” is often high on the list, but perhaps it is equally important to see what we have in common. Dogs have evolved to be our perfect companions, and it doesn’t matter where you go in the world, they’re an important part of the culture, especially in South America.

← My Home in the Airport
The Big Blog Exchange →