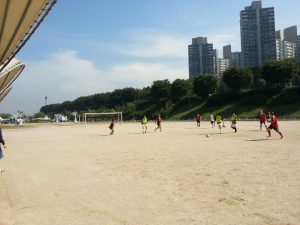 On Saturday, the final whistle blew on my soccer career in Asia. The moment was bittersweet; the 4-1 win was one of the best results I’ve experienced here, but I hate to be leaving my Kimchi Kickers behind.

One thing I will not miss is playing on a dirt surface. In Japan and Korea alike, most rec leagues play on dirt, which may or may not have chalk lines drawn. This, in turn, ensures at least a few players every match will walk away with bloody knees, hands, elbows, etc. A single tackle or fall can lead to a nasty cut from the small, sharp pebbles scattered around the pitch. The uneven surface and unpredictable bounces makes the game especially difficult, and this leads to even more falls and more cuts.

Experienced players have different approaches to try to avoid the scrapes and cuts that come from the playing surface. Our Hungarian striker, Istvan, wears these ridiculous-looking, bright-green stretchy gloves to avoid cuts on his hands. I wear a sleeve knee brace on each leg. And our keeper was burning up in long, padded goalie pants. Still, 5 minutes into the game, I stumbled and fell, getting cuts on my thigh, shoulder, and elbow. I also had a pretty deep cut on one of my palms from where I put my hand out to soften the fall. Suddenly, the ridiculous-looking, bright-green stretchy gloves seemed like a good idea. Between halves, one player asked Istvan why he was wearing gloves, and he laughed, pointed at my cut hand and said, “Because of that!”

Was I done bleeding? Hardly. A few minutes after the first incident, a ball bounced my way, and as I made an awkward adjustment to an awkward ball, the tall Korean player I was guarding did the same. As he threw his arms around for balance, his elbow cracked me square in the jaw. It was completely unintentional, but he saw a yellow card, and I saw red, not a card, but blood that was leaving my mouth at a good clip. I came out of the game, and as my lip swelled, so did our lead. I made it back in for the last 30 minutes or so, and by then the game was already well within our control. When the last whistle blew, the tall Korean dude immediately came over to shake my hand and apologize (again), “I’m sorry, that was not my intention.”

Regardless of the outcome, there was a strict post-match protocol that needed to be followed: finding the nearest place to buy beer. Of course, drinking a post-match beer is much better after a win than a defeat. We’ve already had much more success this season than last. After four matches, we’ve accumulated 7 points: two wins from teams that we lost to three times last year, a draw with a team that was in the first division of our league last year, and a loss to the current second-division leaders. Not bad for a team that only managed to gain 10 points all of last season. Depending on the outcome of the other games, we are either in second or third place in the second division.

I wish the Kimchi Kickers the best of luck along the way, and I hope they can manage to get promoted this season. I’ll be rooting from afar. Now that I’ve hung up the cleats (so to speak), I just want to express my gratitude to all my new German (and Korean, and French, and Hungarian, and Mexican, and Chilean, and American, and Belgian) friends on the team. I had a blast with the Kickers. We didn’t always win, but we always had fun. And I want to give a special shout-out to Ingo and Lars, our captains this season and last, respectively. Thanks for making me feel welcome on the team, respecting my input, and being all-around great guys.

I hope our paths cross again, and we can share a few good beers laughing about all the bumps, bruises, and cuts along the way.

← Reverse Culture Shock: You Can Never Go Back
The Gospel of Mark →