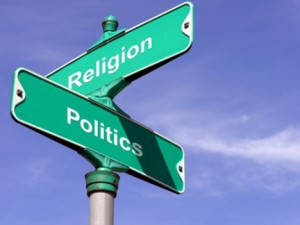 In all of the hoopla over the recent pick of Paul Ryan as the Republican nominee for vice president and the subsequent convention, one fact has been largely overlooked: the Romney-Ryan ticket is the first major political party ticket without a protestant running. On some level, I like that our presidential nominees are no longer necessarily WASPs. Diversity, be it gender, racial, or religious, is generally a good thing.

However, this raises the question of whether it is fair to question a candidate about their religious background. In the last election, the right made hay about Obama’s former pastor, Jeremiah Wright. That chatter has died down, though I think it’s largely due to a fear of retaliation in the form of questions about Romney’s Mormon beliefs.

For me, the question boils down to whether or not a presidential nominee is influenced by his or her religious beliefs. With the aforementioned Jeremiah Wright scandal last election, a legitimate question could have been (and was) raised about whether or not then-Senator Obama was influenced by this pastor, especially when considering that Obama had spoken positively of his influence in other interviews and books.

Likewise, both Romney and Ryan have spoken of the positive influences of their religious background, but neither have been subject to the same sort of questioning that Obama faced in 2008. One might argue that Wright’s comments were far more radical than either mainstream Mormon or Catholic beliefs, but I’m not sure that is entirely true. For instance, how did growing up in a church that was officially a racist institution until 1978 influence Romney? Meanwhile, the Catholic church continues to battle against contraception, despite the vast majority of women (including Catholic women) who use it.

To his credit, Ryan is at least forthcoming about his religiously influenced pro-life stance (though not about his anti-contraception one). Alternatively, Romney has remained fairly silent about his Mormon background.

For an atheist such as myself, this is all very intriguing, and I would love to hear each presidential and vice presidential candidate talk at length about their beliefs. Do they believe in the message or in the literal word of the bible? Do they really believe in the virgin birth? How about the 6-day creation story? Does God really come down from heaven and influence events on Earth? If so, to what extent? Did Jesus really visit America? Will the next president really wear magic underwear? Moreover, can one really be president whilst foregoing coffee?

There are probably some “moderate” religious people out there–and even some sympathetic skeptics–who think I’m being cruel by bringing up the most obviously falsifiable parts of the Bible and the Book of Mormon (aside from the snarky coffee bit). But shouldn’t religion be difficult do disprove? It is, after all, the word of God.

Furthermore, the moderation of religion is merely a matter of throwing out passages and philosophies with which one disagrees. The more “moderate” a believer is, the less they actually believe what is written in their chosen holy book. As a society, we have re-written the morals of the Bible to end or outlaw dietary restrictions, slavery, rape, and certain kinds of “justified” killing. Homosexual lifestyles are already largely accepted, and I suspect that they will soon be allowed to marry legally. So why can’t we ask candidates about their particular level of moderation? And if they don’t consider themselves moderates, why can’t we ask them about the more extreme (and often disproved) moral positions of their church?

Unfortunately, these questions are not being asked, nor would any response to these questions be fully satisfactory. When conservatives doubt Obama’s Christian credentials, I think they are probably right to suspect that he, at the very least, practices a very different version of Christianity than they would profess. In Obama’s case, I sort of hope he’s lying to us about his religion, and he’s actually a skeptic like me. We’ll never know if that’s true or not, since the political liability is just too great.

Some might argue that a person’s religious views are their own, private matter. Normally, I would agree, up to the point where their religious views begin to affect others. As it happens, politicians make decisions that affect everyone. Religious influences can be a guiding philosophy in making policy decisions in the same way that believing in supply-side economics can do the same. If we can question a politician on their guiding economic philosophy, why can’t we do the same about their guiding religious philosophy?

It is not my hope that candidates start attacking each other on their beliefs, but rather, that it is unnecessary to raise such questions in the first place. Personally, I would like to see an America where a president will keep his religious philosophy as far away from his political ones as possible, because only then will we get rational and pragmatic answers to our modern problems. That is not the America of today, so for now, I would implore the media: ask away.

← The Last…
Yongsan: The Bazaar of Technology →