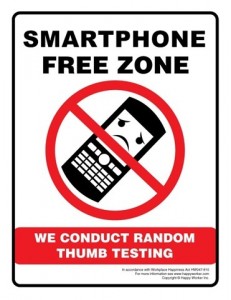 Today, a coworker asked me in a slightly accusatory tone why I didn’t have a smart phone. My reply was simply, “Because I refuse to get one.” She noted that it makes certain things, like inviting me to lunch, more difficult. Yes, the gods forbid sending a text, a Facebook message, an e-mail, or just asking in person. That would be absurd.

I know I will eventually have to break down and buy one, but I’m trying to put off that day as long as possible. Once, there was a time when we didn’t need cell phones. Those days have passed. At one time, having a camera phone was a luxury, now we cannot buy a phone without one. And soon, I’m sure, we will be unable to buy phones without Internet access and all the bells and whistles of iphones and their brethren. By the time I get a smart phone, it will be much cheaper, and I’m sure there will be some new and amazing technological trend that I will be able to do without.

So why take this stand? Foremost, I see it as an unnecessary expenditure. As I alluded to above, we already live in a world that is more connected than ever. I receive Facebook messages, e-mails, and Skype calls from friends and family on different continents nearly every day. Do I really need a handheld devise to keep me tethered to the Internet every waking (and sleeping) second? If I need to get in touch with someone, or they with me, there are already half-a-dozen perfectly serviceable ways.

Furthermore, there are times that I don’t want to be connected. One of the greatest frustrations during my time in India was when I chose to connect, only to be bombarded by stress from work and life. Instead of being able to enjoy my vacation, I had to deal with food orders and dogsitting problems. If I had been unreachable, the people left in charge would have had to figure out these issues on their own, at their expense, not mine. (And as it turned out, the work problems were botched anyway, presumably because the person left in charge has the reading comprehension skills of a toddler).

One of the biggest selling points I’ve heard, “Once you get one, you’ll never go back,” is also, to me, the biggest downside. I’m not entirely sure I want to willingly become an addict of a new technology, as useful as it might be.

I’ve argued before that a small bit of humanity is lost with each technological extension of our bodies. Indeed, it has been suggested that we are evolving into homo technologicus,  a species for which technology is not just a luxury, but a necessity for survival. 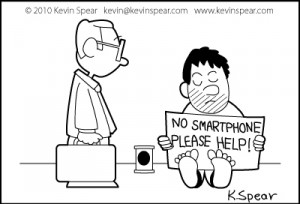 The near future, I’m sure.

In many ways, this has already happened, and has been going on for tens of thousands of years, but this feels different.  A smart phone does not help one stay warm in winter or hunt for food (unless finding a nearby restaurant counts). An argument could be made for its social necessity, but in this regard, the gap between a smart phone and a dumb phone is extremely narrow.

I know I’m taking a stand against a losing cause. And I know it’s only a matter of time before I’m playing Angry Birds, or whatever game is fashionable then, whilst texting and doing Google search. I can see the benefit of having a smart phone, and I can imagine one being quite useful in certain professions. For now, I don’t want it. I want to unplug while I still can, and I’m going to do that right about now.

← How does one say “Baseball” in French?
America the Violent →

4 comments for “A Stand Against Smart Phones”