Say what you will about Milwaukee in winter, but in summer, the city truly comes alive. Well, it comes alive for the over-21 crowd. Options are much more limited for those unfortunate souls who are unable to partake in one of the city’s many, many, many fine drinking establishments. So when three twenty-year-old French couchsurfers came to town, I was at a bit of a loss about what to do.

Further exacerbating the situation, only one of them spoke English with any fluency, so there was a lot of translating going on. As it happens, Milwaukee has a couple of professional sports teams, and one that people actually care about: the Brewers. While Milwaukeans will cheer on their beloved Packers in fall, it is definitely a baseball city throughout the summer months. So I decided to take them to a baseball game at Miller Park with my then-girlfriend, Sarah.

Baseball was my first love growing up. I loved playing catch, hitting, and going to County Stadium to watch my Brewers–back then they were clad in royal blue pinstripes with bright yellow accents–with my dad.

And then a funny thing happened: I discovered something called “other sports.” Baseball, as it turns out, is a pretty boring game. It is a throwback to another era, one where radio was king, and life moseyed along at a slower pace. As I began to enjoy football, and later soccer, I wondered what I had ever seen in baseball in the first place. These days, I won’t watch baseball unless I’m at the stadium or on the rare occasion when the Brewers are playing in a meaningful game.

Regardless, it seemed like something that a few travelers might want to see. So we headed off to Miller Park, the gleaming new(ish) monstrosity near the grounds of old County Stadium. It’s a nice stadium, and the retractable roof is a seeming necessity for Milwaukee, but I feel no connection to it, like I did with County Stadium. I saw Nolan Ryan record his 300th win there. I saw Robin Yount tally his 3,000th hit from the stands. I saw Paul McCartney play to 50,000 people in the cold, June rain, whilst shivering and singing along in the upper deck. I even saw my share of NFL games there, before the Green Bay Packers made the radical decision to play all of their home games in a football stadium in their home city. And the stadium was immortalized in the classic movie, Major League, starring Charlie Sheen as Rick “Wild Thing” Vaughn. All of this happened before I had spent a decade on this planet. Now, the stadium is gone and the memories are fading. But there’s a TGIF in the outfield stands, so it has that going for it. 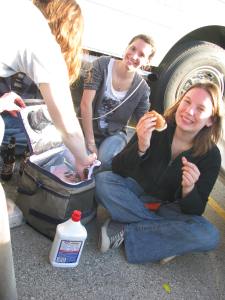 My French couchsurfers, tailgating and not yet bored by baseball.

We found ourselves tailgating approximately where County Stadium had been, in shadows of Miller Park, grilling sausages and drinking non-Miller beer. This was probably the highlight of the night for everyone involved, and only now do I fully understand the importance of tailgating.

Once inside the stadium, I realized that I was in for a very long night. The fact that we had amazing seats, courtesy of one of my dad’s business contacts, seemed to be completely lost on my guests. We were on the first level, directly behind home plate, and not 20 rows back. However, great seats do not make for a great game, and I found myself having to explain nearly everything that was going on to Marion (the one that spoke English), who then had to translate for her friends.

I grew up watching and playing baseball, so the rules of the game seem fairly straight forward to me, but as I found myself explaining rule after rule and I saw the confused looks on their faces, I began to see things from their perspective. Why is it sometimes an out when a player steps on a bag, and other times it is not? What is this strike zone you are going on about? So a player can run at any time, yes? But not when the ball has been caught? Only for the grace of the baseball gods did I not have to explain balks, ground-rule doubles, and the infield fly rule. 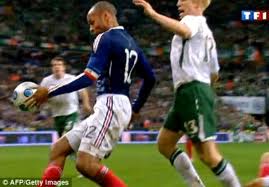 However, the “No Hands” rule doesn’t seem to translate into French.

Suddenly, it became clear why soccer was the world’s biggest sport. It just so happens to be the easiest to understand. There are basically four rules: 1) Don’t use your hands, 2) Try to put the ball into the goal, 3) Don’t be offside, 3) Don’t foul another player.  Voila.

Also, even the most boring soccer matches are only 90 minutes. This game was already over three hours when I asked my guests if they wanted to leave during the eighth inning. So we left early, beat the traffic, and wound up going to the rooftop of Sarah’s apartment building for a panorama view of the city, and drinking a few more non-Miller beers. It wasn’t a bad day, but I never offered to take other couchsurfers to baseball games.

Some things are just American, and no amount of explanation can make foreigners understand them. Baseball is one of these things. So much so, that I’m shocked the game took off anywhere else, especially in my current home of South Korea, but that’s a different topic for a different day.