When I’m asked about my home, my natural inclination is to talk about Tennessee. Friends and family alike openly question this loyalty, “How can someone who was born in Wisconsin, and spent the majority of his first 13 years of life in the state, claim to be a Southerner?”

Well, I might respond with several of the following facts to strengthen my Tennessean credentials: I’ve lived in Tennessee for longer than any other state, I use “y’all” without shame or irony, I prefer sweet tea to regular, and I root for my beloved Tennessee Volunteers above all other sports teams, even ones that I happen to co-own. Oh, and one more thing, I hate winter.

So, upon returning to Wisconsin in the fall of 2008, I was more or less completely unprepared for winter. Years in the South had softened me. Winter, on the other hand, was more than prepared for me. Wisconsin received record amounts of snow that December, leaving many in the state to second-guess this “Global Warming” business.

Around the second week of December, I accepted a Mexican couchsurfer by the name of Eitan into my home. He was a grad student in the equally inhospitable state of Minnesota, and was taking a road trip south for his winter vacation. He only intended on staying a day, but Mother Nature had other plans. When he woke up in the morning, it became obvious that he wasn’t going anywhere. The heavens had opened up and dumped over a foot of snow all over Southeastern Wisconsin. 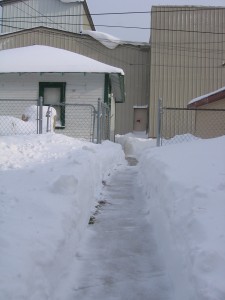 The snow came up well over my knee.

What ensued next was one of my fondest memories from that old, drafty apartment in Riverwest. Eitan and I looked out at blanket of fresh snow, put on some warm clothes, grabbed a couple of shovels, and went to work. The whole neighborhood came alive, helping one another clear the streets, dig cars out of snowdrifts, and even help the occasional intrepid traveler who had decided to hit the roads that day. We must have helped liberate two-dozen cars that had become stuck in the deep snow. It was a great feeling to give a stuck car that final push, helping them gain traction and sending them on their way. One woman thanked us with some freshly glazed donuts. It was tough work, of course, but fun, rewarding, and completely unexpected.

As the roads slowly cleared up, and fewer cars became trapped in the middle of the road, we hung up our shovels and walked to the near-by grocery store. This was an experience in and of itself. Ordinarily, it would have only been a few minutes away by foot, but this trek took a full half-an-hour to complete the round-trip.

The grocery store was one that I never had been to previously, and one to which I would never return again. It was, and I don’t use this term lightly, completely ghetto. The store was dark, with most of the florescent lights either flickering or already dead. The shelves were mostly empty and in poor repair. Undeterred, we picked up some bacon and eggs for a late and well deserved breakfast.

We spent most of the rest of the day inside staying warm and dry, with the help of cold and wet libations. Couchsurfing often forces people out of their elements, and never was there a better example of when a Southerner and Mexican joined forces to combat the harsh Wisconsin winter.

← It Keeps Getting Better
Preview: India and Other Things on the Horizon →