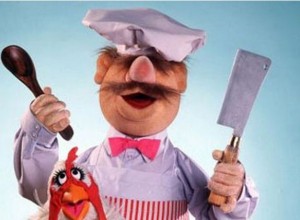 I made sure to end my speech by exclaiming, “Bork bork bork!” And then I indiscriminately threw some utensils.

I’m not a big fan of the “humble brag” so I’m just going to come out and publicly pat my own back: I got a promotion at work! I am now the Cooking Content Area Leader at English Village.

It’s a far cry from just under a year ago, when I was literally fleeing my previous job. I feel completely vindicated; when I am put in a situation where I am allowed to work hard and express creativity, I thrive. While I would not want to relive my struggles again, they have made the success at my current job all the more rewarding.

The process to become a CAL is quite unique, and I’ve never been so nervous for an interview in my life. Both myself and the other candidate gave speeches to the seven other teachers in our content area, plus a head teacher who was in attendance. We then had to stand side-by-side to answer questions about our plans and our past performance. Finally, all nine members, candidates included, voted for the next CAL.

I tried practicing my speech several times at home. As I was giving a last rehearsal over my lunch break, it became obvious that I was just too nervous to go in without a speech in hand. Honestly, I could barely string two words together in any coherent sense. I tried to rationalize away the nerves: I’ve been in plenty of interviews before and I speak in front of people for a living. And these were all people that I knew and worked with on a daily basis. Still, my nerves could not be calmed, so I made the wise decision to print out my speech before going into the room.

I listened to the other candidate give his speech first for an uncomfortable few minutes. He went up there without a speech in hand, winged it, and did a great job. Then it was my turn. I stood up and took the speech out of my back-pocket, “I’m a little bit nervous so I brought my speech with me.” That got a few chuckles across the room, lightened the mood just enough, and it was all downhill for me from that point on.

I thought I made a strong case, and then it was time for questions. We stood side-by-side for the question and answers session, which was extremely uncomfortable, particularly during my competitor’s numerous lengthy answers. Right off the bat, we both received the toughest questions of the session. I won’t go into detail here, but those that were in the room could feel the tension ratchet up. When all the questions had been asked, we checked our box of choice on a small slip of paper: “Zach,” the other guy, or “No Confidence.”

The meeting finished around 2:30, but I would have to wait until 5:30 for the results. It was a long three hours, particularly with the knowledge that the head teacher only had to count to five to decide a winner.

My nerves never really died down during those few hours. Generally, one of the head teachers will pull the teachers who are up for a new position aside and tell them the results privately before making the public announcement. However, this was not the case in this instance. Instead, I sat with my heart pounding away and a lump in my throat in front of all of my coworkers awaiting the decision.

Kiyoung, the 9-6 head teacher stood up to start the meeting and made the announcement. I repeated “Zach, Zach, Zach” over and over in my head, as if my mere thoughts alone could sway the votes retroactively.  Finally, he said, “The new Cooking CAL is Zach.” I breathed a huge sigh of relief, and smiled and nodded sheepishly at the light applause. Kiyoung then asked me if I’d like to make a speech. “No, thanks,” I replied. After a little prodding I managed, in an utterly inelegant way, to thank the other cooking teachers, and said I looked forward to the opportunity. To paraphrase Sting, “Eloquence had escaped me.” 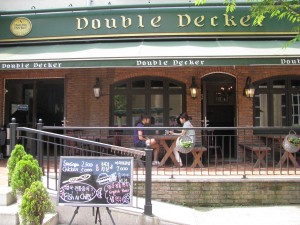 The Double Decker, on a much warmer day.

A few people congratulated me on the way out of the room. Soon thereafter I approached my former competitor and tried to offer him some words of encouragement, though I’m sure they sounded hollow in light of the results. I managed to hold in my excitement until I arrived at the Double Decker, the on-campus English (style) pub. When I arrived, I let out a loud “WOO!” with an accompanying fist-pump. My friend and coworker, Michael was there for a celebratory high-five, and I bought him and couple of other people a round of beer.

They say that you should never have a drink when you need one, but I don’t think that applies to celebratory libations. After the first beer and some friendly conversation calmed my nerves, I had the same realization as Robert Redford’s character at the end of the movie The Candidate, “Now the real work begins.”  I can’t wait.