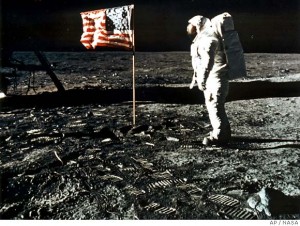 Last week, Republican presidential hopeful Newt Gingrich made headlines by promising a Moon base by the end of his second term. Now, let’s ignore the fact that Gingrich faces numerous uphill battles to be elected to president (TWICE!), and instead, let’s look at the reaction to this statement.

Despite my strong political leanings and background in political science, I’ve stayed away from writing too much on political topics. In this tradition, I will not delve into my own feelings about the Republican platform.

Instead, I will take a serious look at the state of space exploration in the U.S., which certainly fits comfortably into the purview of this website. Personally, I grow the most through adventure, risk taking, and pushing the boundaries, and I hope that we as a society can get back to a point where we do the same on a much greater scale.

Gingrich’s Moon base declaration was met with both skepticism and ridicule. Why? We have the technology; we have put men on the Moon (with on-board computers that make iphones look like supercomputers), and we have had multiple space stations. All it takes is planning, will power, and money for a base to come to fruition. Perhaps we are far enough away from the Space Race that the phrase “Moon base” is more likely to conjure images of a Bond villain’s lair than of a realistic goal. While I didn’t live through the Space Race, I imagine the idea of a Moon base was probably less laughable in the 60s than it is now. I find it interesting that in the over 40 years of advancements since first putting a man on the Moon, we are retreating from the cosmos instead of boldly going forward.

So, the idea that we can have a Moon base is not laughable. Perhaps the financial realities of putting a base on the Moon makes the idea laughable. The Apollo Program spent approximately $100 billion in today’s money. That’s a lot of coin, to be certain, but would still pale in comparison to other large expenditures in the U.S. budget: $1.1 trillion on Medicare and Medicaid, $808 billion on Social Security, $683 billion on defense, and $474 billion on interest on our debt. And those are yearly expenses. A Moon base will probably cost more than the Apollo Program, but there are also significant scientific discoveries and breakthroughs that would help to offset these costs.

In the past, NASA has been a major driving force behind innovations and discoveries. Over they years, they have filed more than 6300 patents with the U.S. government, many with very practical, everyday applications. These innovations include: water filters, cordless tools, safety grooves (in concrete), shoe insoles, ear thermometers, memory foam, and scratch-resistant lenses among many others. Even today, NASA produces between $7 and $8 in goods and services for every dollar it receives in funding. Given these facts, the financial cost hardly makes the endeavor laughable.

What are the potential benefits of a Moon base? Well, this largely depends on the placement of the base. If it were located at one of the poles, it could be used as our gateway to the rest of the solar system. We know that water in the form of ice exists at the bottom of large craters at the poles, and this water could be used to a) sustain the water needs of the base, and b) to be broken down into liquid hydrogen and oxygen (i.e. rocket fuel). With this base, it would be far easier to launch manned or unmanned missions to the outer solar system since the thrust required to overcome the Moon’s gravity is far less than that of the Earth’s.

Were the base on the far side of the Moon, we could man the most powerful telescope ever made. This is the crux of the issue: science and discovery require us to push the limits of our knowledge, and a moon base would allow us to reach and see farther than ever before.

Additionally, returning to the stars offers a boost in morale and will help to drive science and engineering education. When did we become a nation that scoffed at the idea of discovery? The U.S. won the Space Race to the Moon, but since then we have taken step after step backward. In doing so, we are allowing China, India, Russia, and the E.U. to take the reins of scientific discovery. In certain areas, this transition has already happened; the Large Hadron Collider is now the largest particle accelerator because funding for an even larger accelerator was dropped by congress in the early 90s. The investment we made in our space program served us well in the 50s, 60s, and 70s; it is now time to renew that investment. We have major problems on Earth, but investments in space have always proven beneficial at home.

Those of you who know me and my politics probably find it difficult to believe that I would defend anything said by the former speaker. However, I’ve always been a believer that ideas should stand on their own merit and not be marred by previous differences of opinion. While I might disagree with Gingrich on how to fund the proposed base, I wholeheartedly agree that we should start reclaiming the frontiers of space and science.

2 comments for “Is a Moon Base Really Laughable?”