“I kind of feel like this is Year One and last year was Year Zero. It was such a unique situation that we walked into last season, it didn’t feel like your first year. I feel like right now, this is Year One.” -Derek Dooley, Head Coach, University of Tennessee. 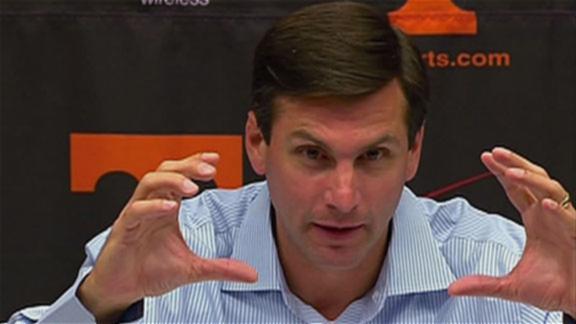 Coach Dooley, about to say something awesome

Last November I started a little side-project, Dooleyisms, to chronicle and archive the often humorous, and always insightful, quotes of Coach Derek Dooley. I feel a strange sort of connection with this man I’ve never met, and not just because he’s the head coach of my favorite football team. No, I see my own struggles and that of my beloved football team as running nearly parallel lines. And I see Dooley’s methodical approach to righting the ship as inspirational, and as an approach I would like to emulate as closely as possible.

Last July, when I was seriously considering a move to Korea, I felt like I needed to hit the “reset” button on my life. I’m not going to beat this dead horse again about my decisions that brought me here less than one year ago, but now that I’m about to leave this job for seemingly greener pastures, I feel like Korea Poly School was perfect for Year Zero.

Sometimes, before we seek to improve ourselves, it is necessary to stop the bleeding. I had debt and bills to pay off, I had no long-term career goals, and I had not worked a 40-hour week in a professional environment in quite some time. I found my first few months in Korea therapeutic, and it helped me get to the right point in my life to be mentally prepared for the next steps forward.

So if my year(ish) at KPS was “Year Zero,” what have I learned and what should I expect of myself going forward?

Tomorrow, my “year” at KPS will come to a close, and Year One at Gyeonggi English Village will begin. I am as excited as I am nervous. Will I thrive in this environment, or be plagued by many of the same problems in the past? How will my problems evolve, and how will I deal with them? What will my new social circle look like, and how will I fit into the work dynamic?

None of these questions, fears, anxieties, or hopes will be answered tomorrow, but they will be soon enough. Coach Dooley likes to talk a lot about “The Process” of improvement: that is waking up each day to try to improve a little bit, and after the course of a year, there will be marked improvement overall. I can definitely say that I see improvement from my situation last year, and I hope I will be able to say the same thing at the dawn of Year Two.