As I was leaving for work the other day it occurred to me that I now leave home with no fewer than three electronic devices, none of which existed at the beginning of my life. For an individual of my age–and living in this age–I have been particularly averse to many, if not most, technological advancements. 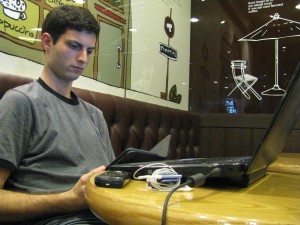 For these reasons, I have intentionally held out on signing up for facebook or myspace (if I had just held out one more year on the latter I could have saved myself a lot of trouble), I have rejected the idea of ipod ownership, and put off the ownership of a cell phone for as long possible.

Despite all of this, I carry at least three of the four following items with me on a daily basis to school: my laptop, my ipod, my Kindle, and my cell phone. Part of me wants to dump all of them into the Han River, but I can’t deny their usefulness. The ipod makes my walks go by quicker, while taking longer. The Kindle allows me to possess a bookstore at my fingertips. My laptop allows me to stay connected with the world and write to my heart’s content. My cell phone? Honestly, I would be OK getting rid of this, but it is useful when I’m out and about and need to get a hold of someone.

Still, I can’t shake the natural distaste for all of this technology, as we are certainly losing some of our humanity in the process. When I ride on the subway, everyone is either talking, reading, listening to music, or playing games on their device of choice. Hardly anyone speaks to one another. When I pick up my Kindle, I don’t feel the same connection to the words on the screen as I do the words on the page. And when I walk Sydney with my music blasting on my ipod, I miss out on many of the sights and sounds of Seoul, as well as the ability to think about life, the universe, and everything.

Furthermore, I wonder how much technology helps, and how much it hinders our everyday activities? Does it save us time, or cost us more? This answer surely varies from person to person, but I know that with each successive new piece of technology an adjustment period occurs wherein the individual must first learn the ins and outs of operating said device and then learn new habits to get the most out of it. I made light of this fact in my last post about trying to set up this blog, but even considering the time wasted on the aesthetics, it certainly saves time over writing a letter by hand, and sending it to everyone who reads it online by mail.

I think reasonable people, myself included, can agree that technology can be used to save time. But what about technology that is almost exclusively used as a time waster? I’m looking at you facebook. I’ve joked in the past that facebook is solely responsible for The Great Recession, and I’m not convinced that it isn’t. Facebook is great, and I certainly wouldn’t be able to keep up with the goings-on of my friends on various continents all over the world without it. Unfortunately, this is usually only on a very superficial level, and additionally, it is an enormous waster of my time. Worse yet, kicking facebook is probably on par with quitting smoking, insofar as I don’t know anyone who has quit either. I guess that gets to the crux of the matter: technology advances, and we must adapt, whether it is good or not is completely irrelevant. Saying, “I don’t like computers” at this point is like saying, “I don’t like light bulbs,” there are really no viable alternatives, so the choices are either to learn to get the most out of technology or suffer as a consequence. So hooray technology!

← On Blogging
An Afternoon in Insadong →