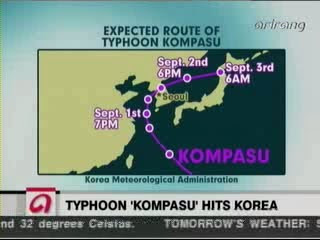 11:06
Typhoons must love me. During my first month in Japan, I experienced two; now, one week into my stay in Korea, get get slammed. I pretty much slept through the whole ordeal but most of my coworkers were not so lucky. This morning on my short walk to the subway station I saw broken windows, trees down, and ruined building facades. According to word on the street, three subway lines were shut down from the flooding.

Despite all of this, I arrived right on time to work, only to find the school eerily quiet. Only two people were here, both new, and we quickly began wondering what was going on. We discovered that our coworkers had received texts telling them not to come to work until 10. Since none of us newbies have phones yet, we couldn’t receive the message. The phones and Internet were down at the school, only adding to the mass confusion. The storm seems to have dissipated and we’re sitting around bored, waiting for the students to arrive.

Allegedly I will be moving into my permanent place today, but in light of current events, we will see.

14:26
Update: I’m not moving today. The new word this time is that I’ll be moving mid-September, but to a nicer place. We’ll see.

September 3, 2010
Update #2: Just found out from a coworker that my apartment was giving to a new guy. A newER guy than me. I wasn’t annoyed before, but I sure am now.